This was our second tour with Antelope and it was the ‘Super Babeldaob Tour’, tagline, ‘You will discover another fascination other than the ocean in Palau’ and they quite frankly couldn’t have been more right. It was $130pp and again it was just my husband, me and the guide. Our guide was from the Philippines so this time, the tour was all in English. He was really great and kept us informed and entertained all day.

First stop, Taiwan Fruit Farm/Orchard. It was an additional $5pp but if I’m being honest, the whole reason that I wanted to do this trip was to go and eat the fruit, so of course we went. First we had a look around at all the different fruits that were being grown including papayas, lemons, pineapple, soursop, dragon fruit, calamondin, tree cucumber and even more things that we had never heard of. 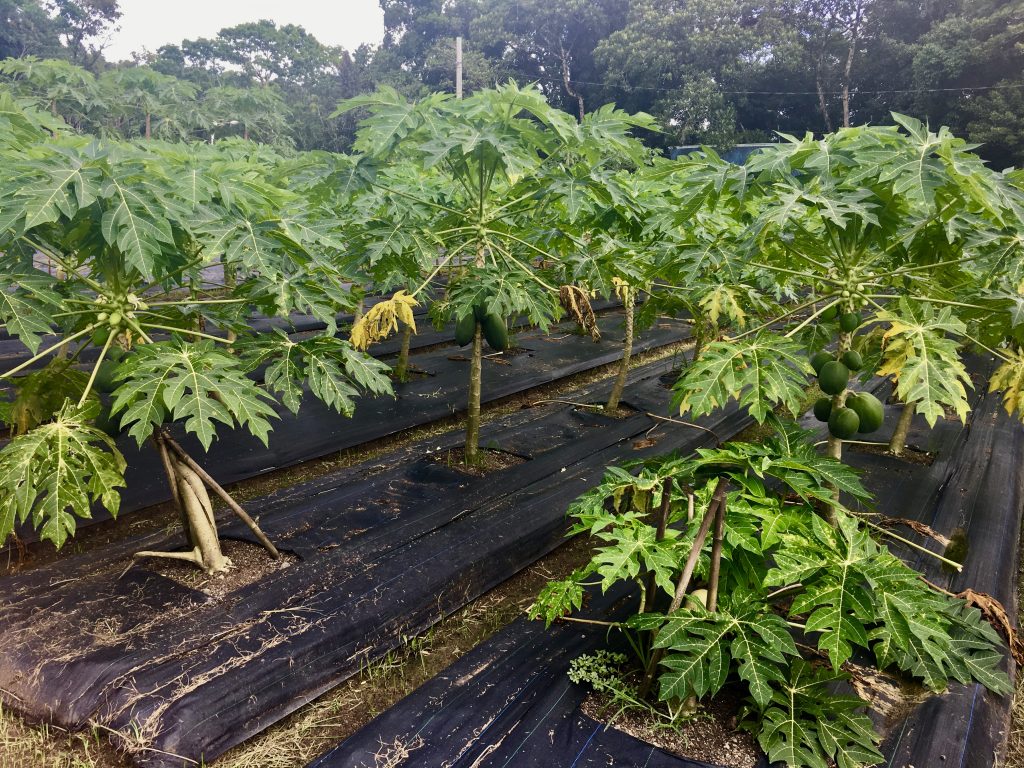 After the tour we got to taste the goods and it was some of the best fruit I have ever tasted. If I lived in Palau I’d have a massive orchard and I’d just live off the fruit. It was amazing. 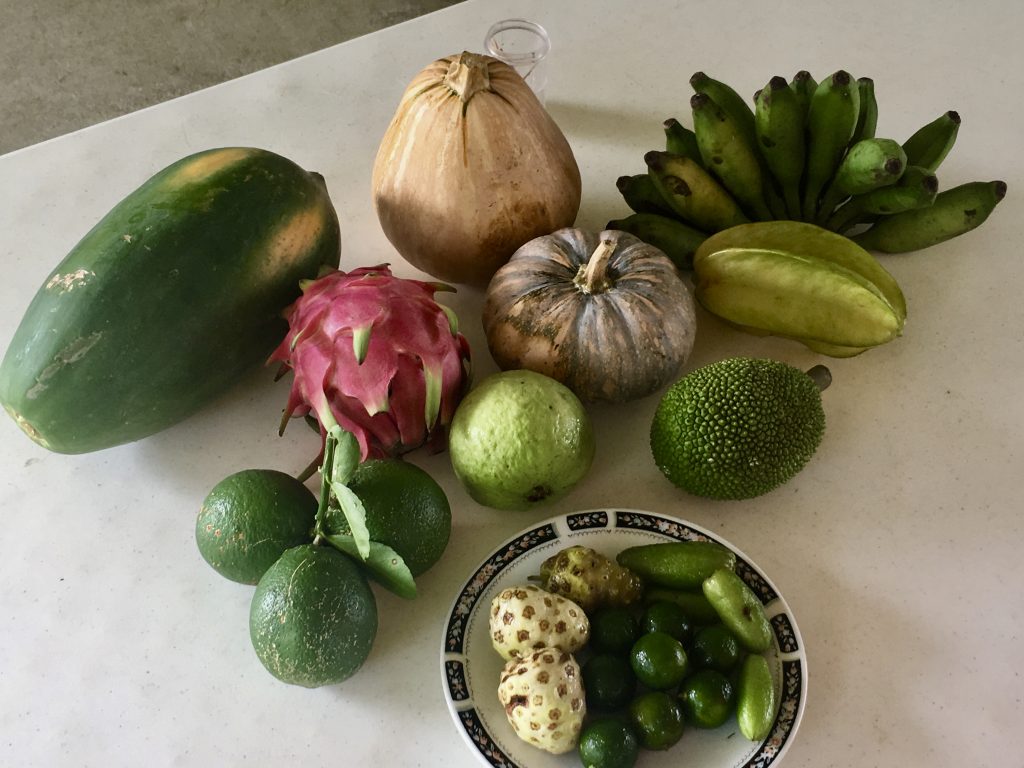 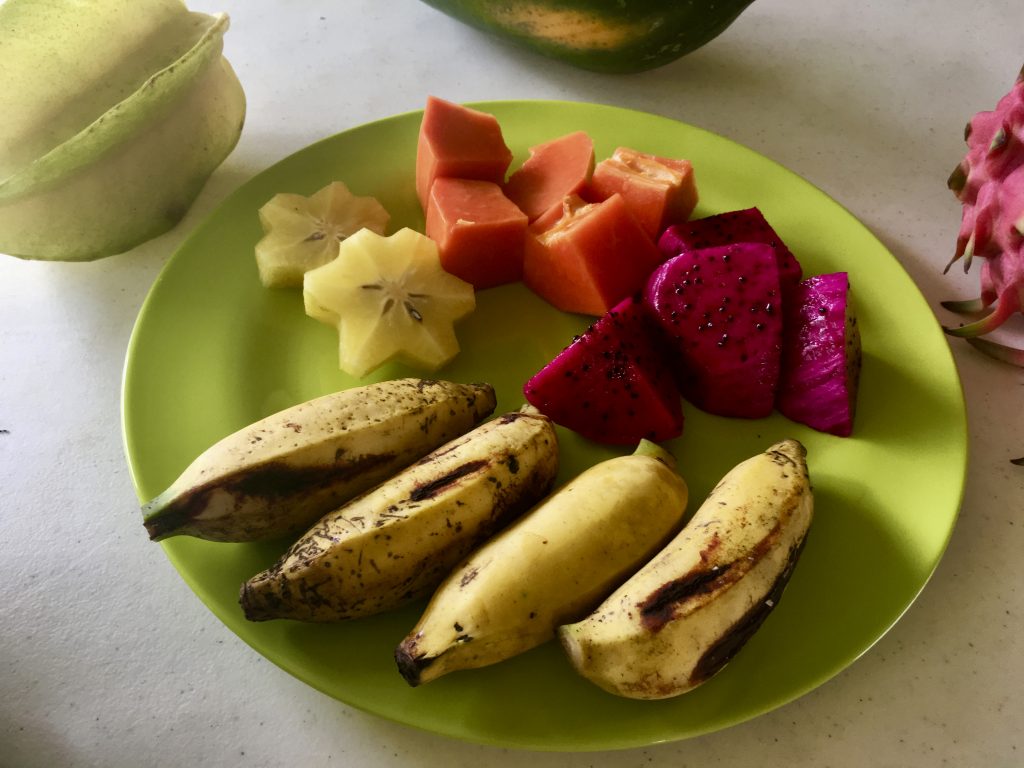 After that, we headed to Ngardmau waterfall. I was thinking, yeah, waterfall, I’ve seen them before, it’ll be good but not as good as the fruit. If anything, I was thinking that the fruit should have come last, you know, save the best for last. Well, this waterfall, it was brilliant. We hiked around 40 minutes to get there through the jungle. It was actually quite nice though because it was shaded by the trees. 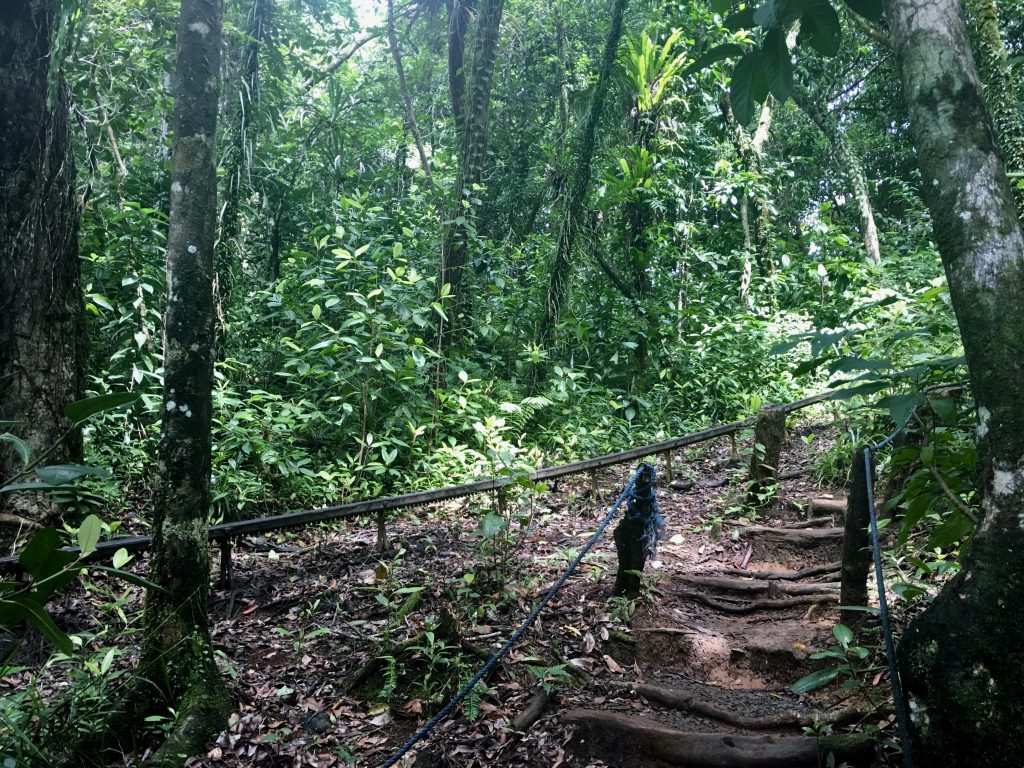 Then we hit water and I was getting more excited. 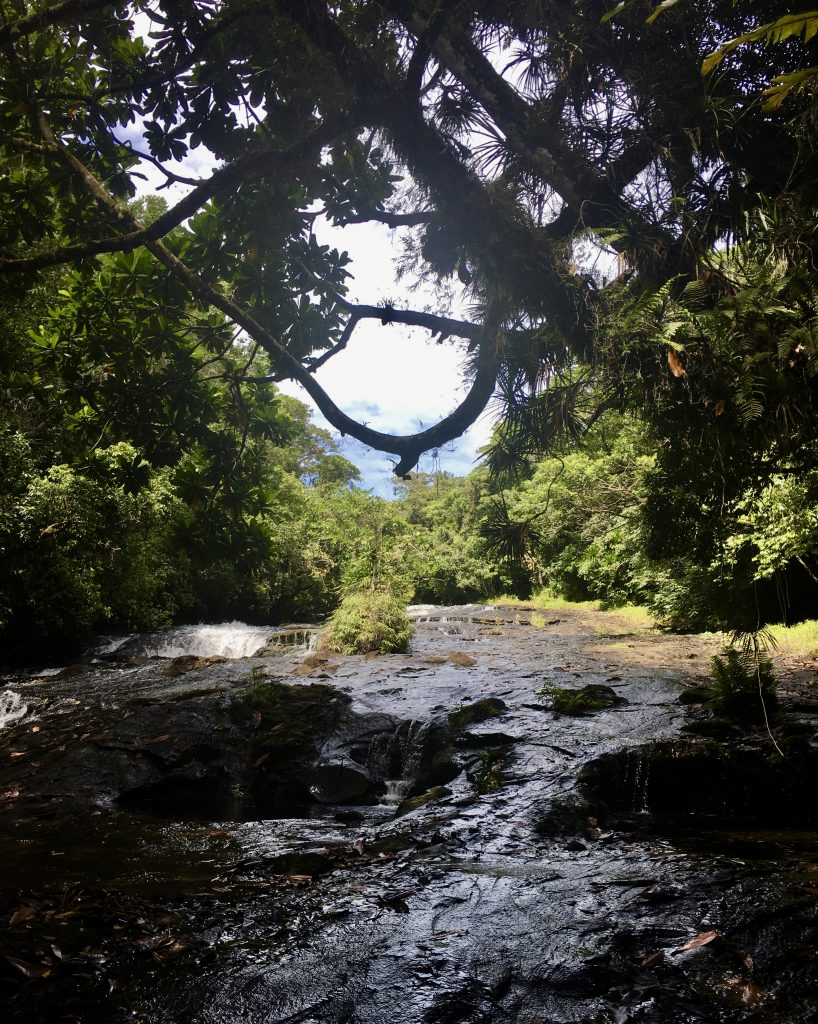 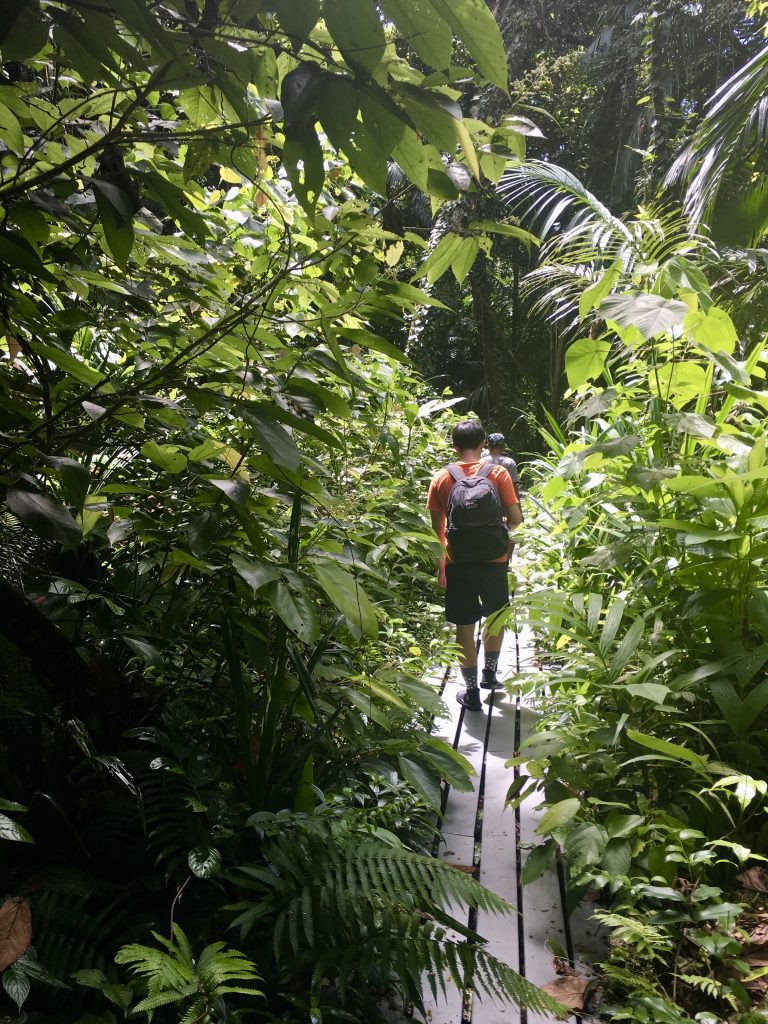 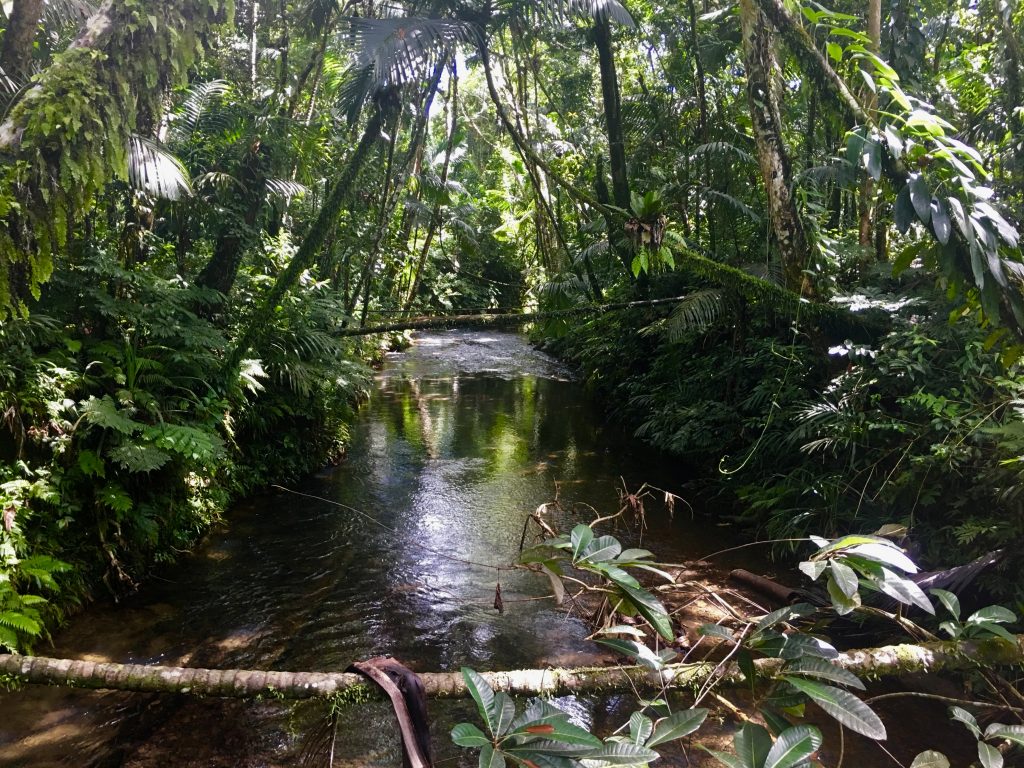 Then we saw Ngardmau waterfall. It’s too hard to capture on a photo but it was inspiring. There were only two other people at the waterfall whilst we were there and we got to go and stand under it – that felt like a violent massage and mess in the water. Our guide was taking pictures – you can imagine (and that’s all you’ll be doing!) how great I looked with no make-up and hair tied up so you can’t really see I have hair. 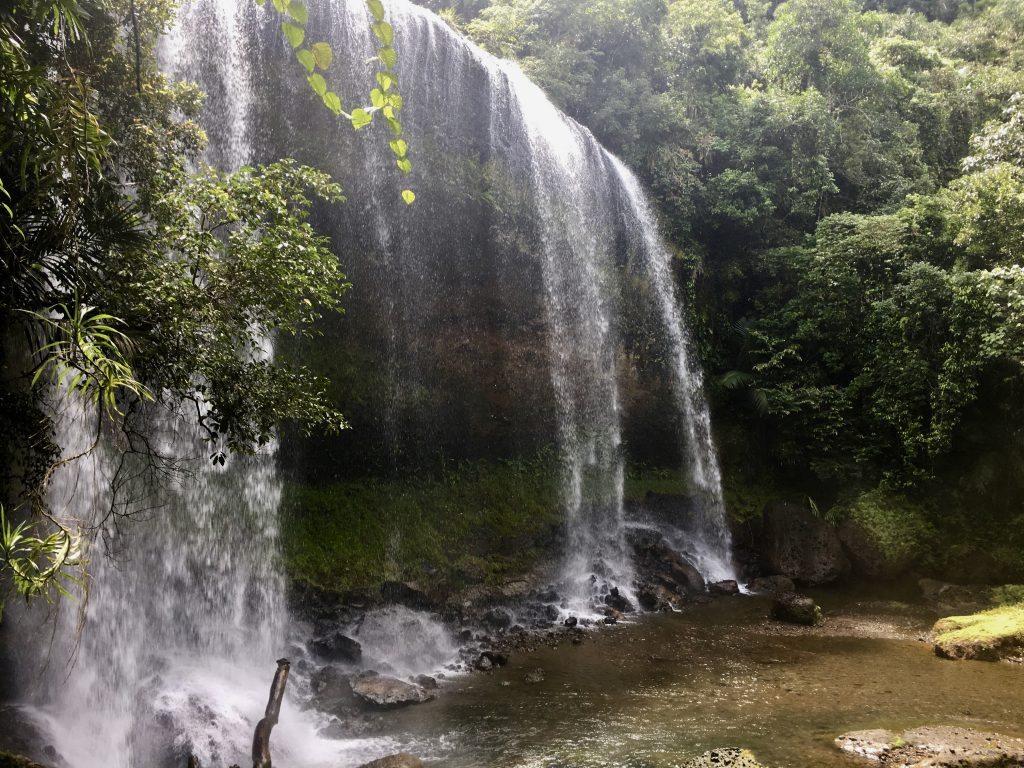 After the waterfall, we went to have lunch. We could have paid to go to a beach, but we said no and we went to eat here instead. I’m sure the beach was nice, but could it have been any nice than this? 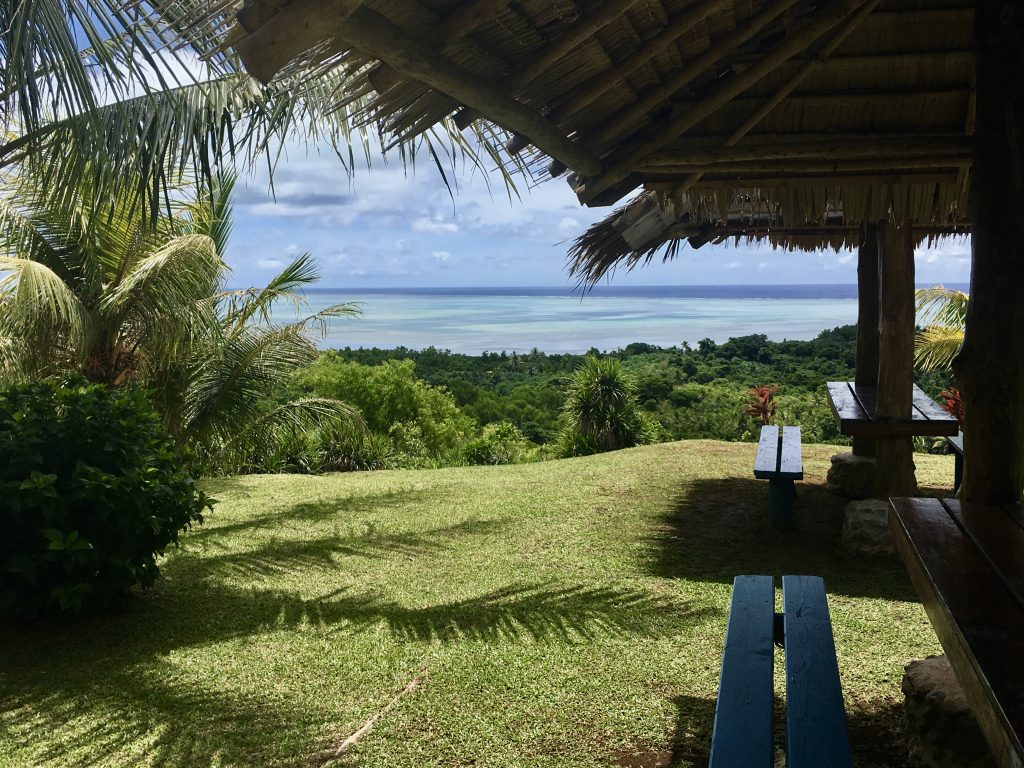 Plus there was a cat! We had sandwiches for lunch which were great. Like a club sandwich but with omelette too. Mine didn’t have the meat. Really good – preferred it to the bento, but then again I do love a sandwich. We shared our sandwiches with our new friend (let’s be honest, husband more than me because he had meat) and our water. 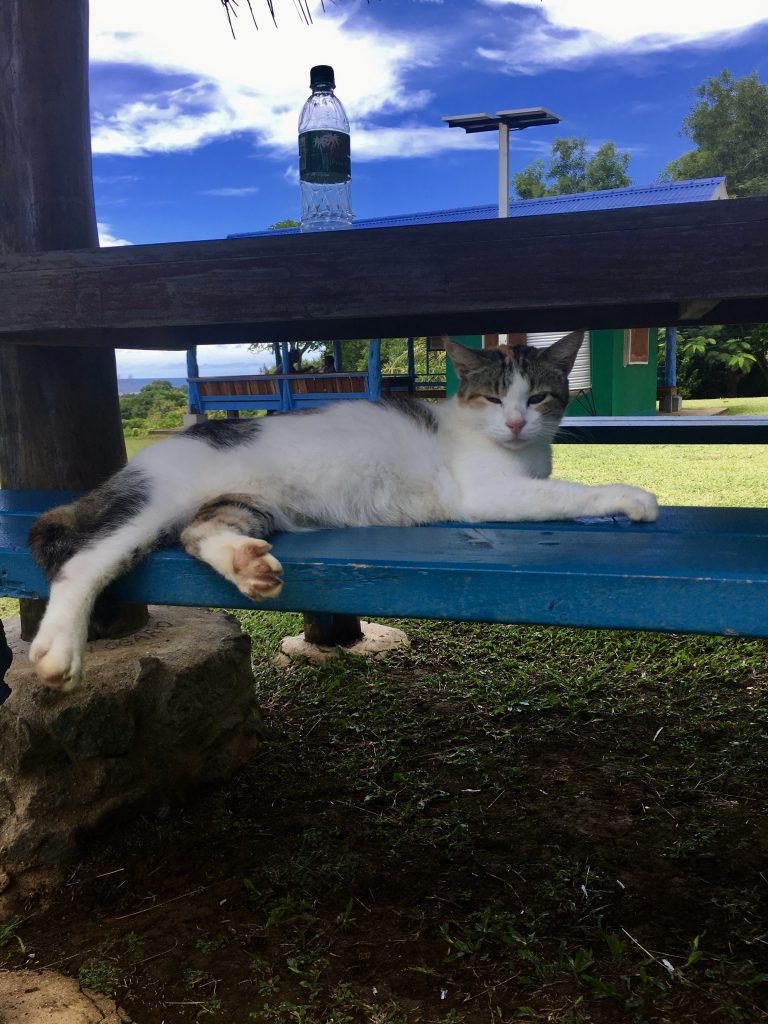 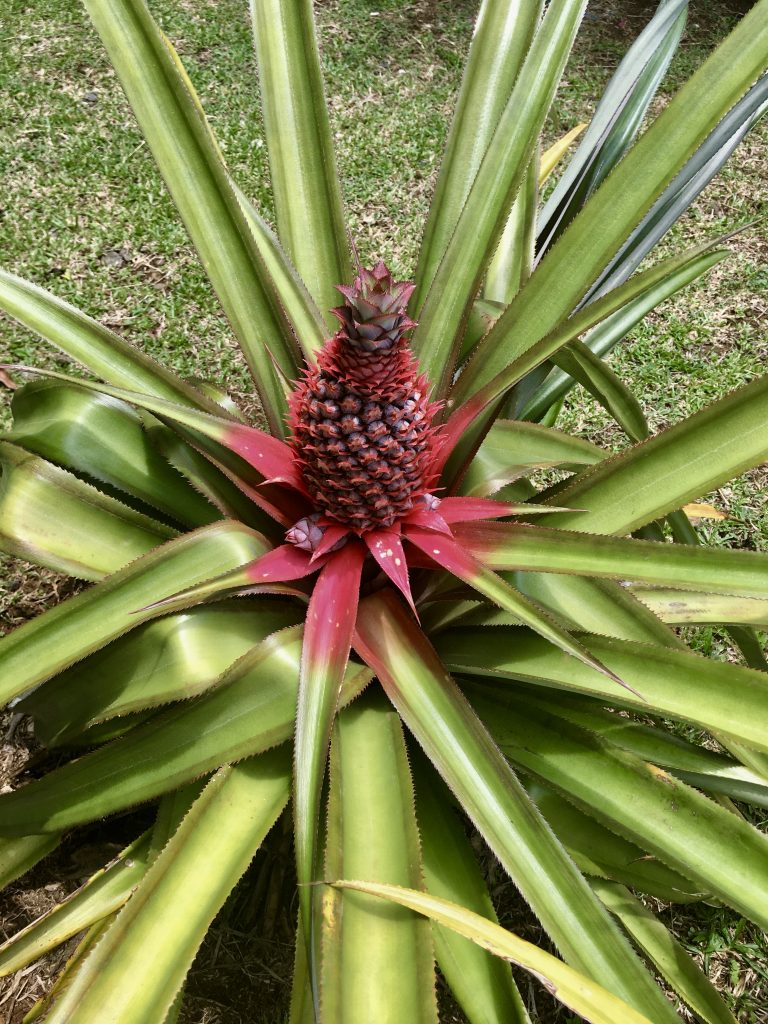 So this is the place where the stone monoliths are located. They were great, but they are just rocks when it comes down to it. They are still shrouded in mystery which is pretty interesting and the location, superb. 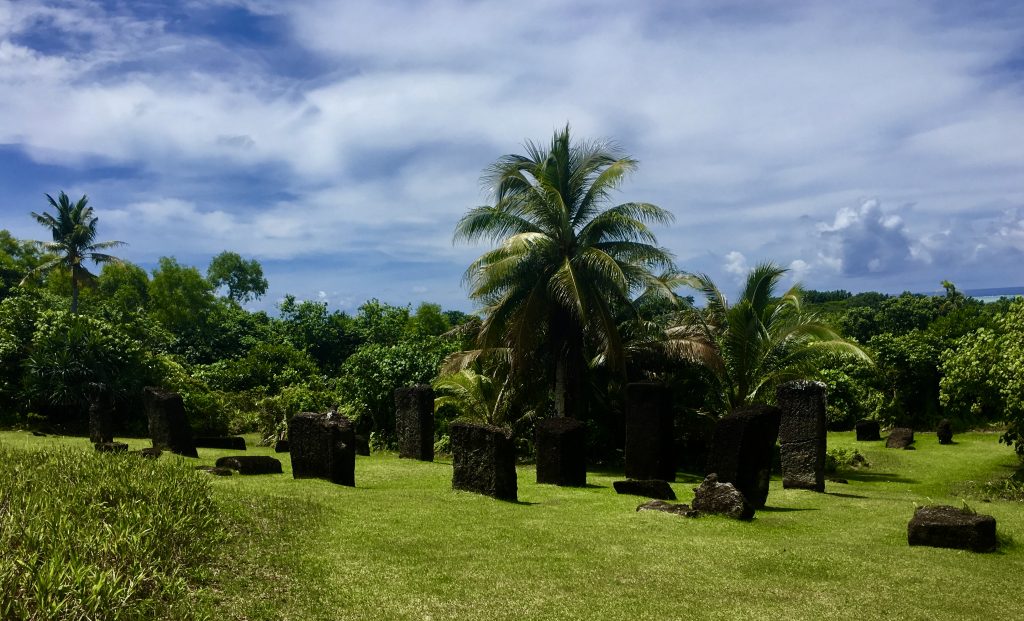 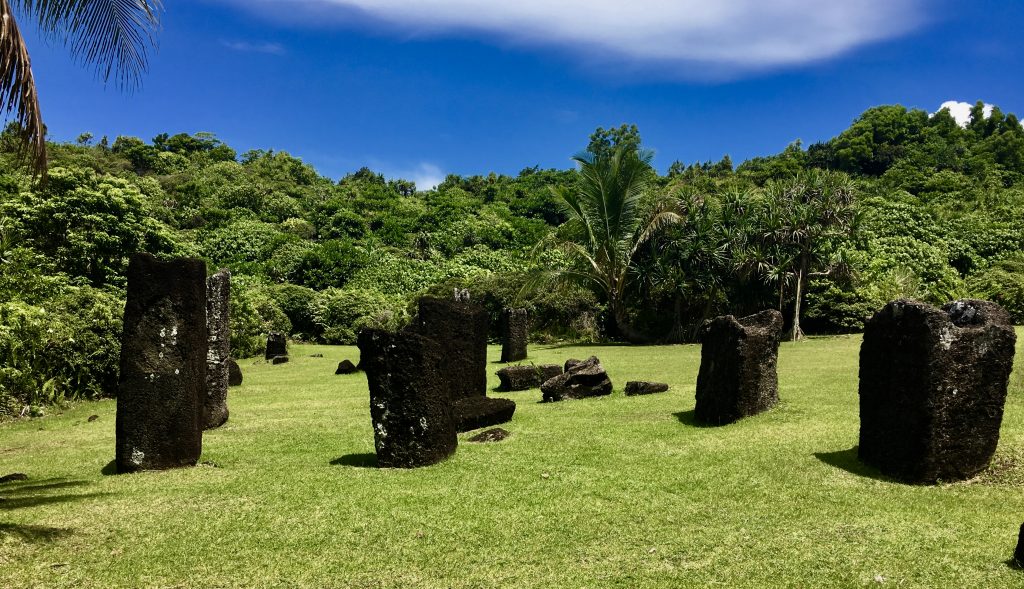 Our final stop was at Kaigun-sho. We had to go and get a permit beforehand which our guide sorted out. It was a good job we got it because no sooner had we stepped out of the car at the place, than an official jumped out of theirs and requested to see it. This was the old HQ for the Japanese army during the war. 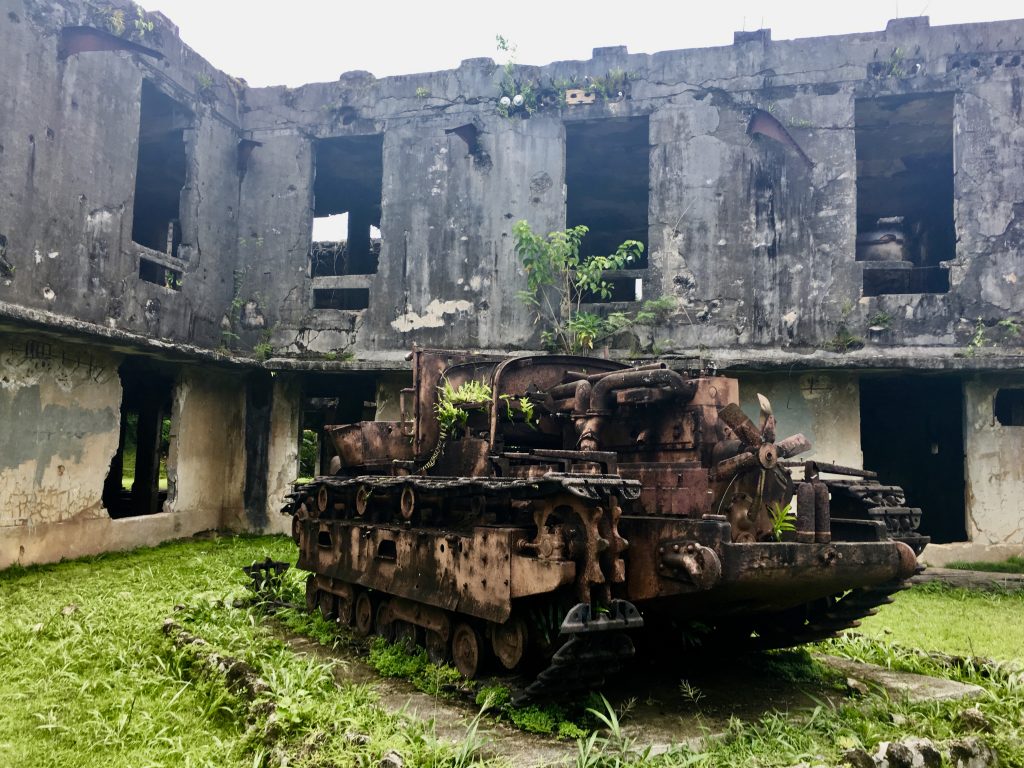 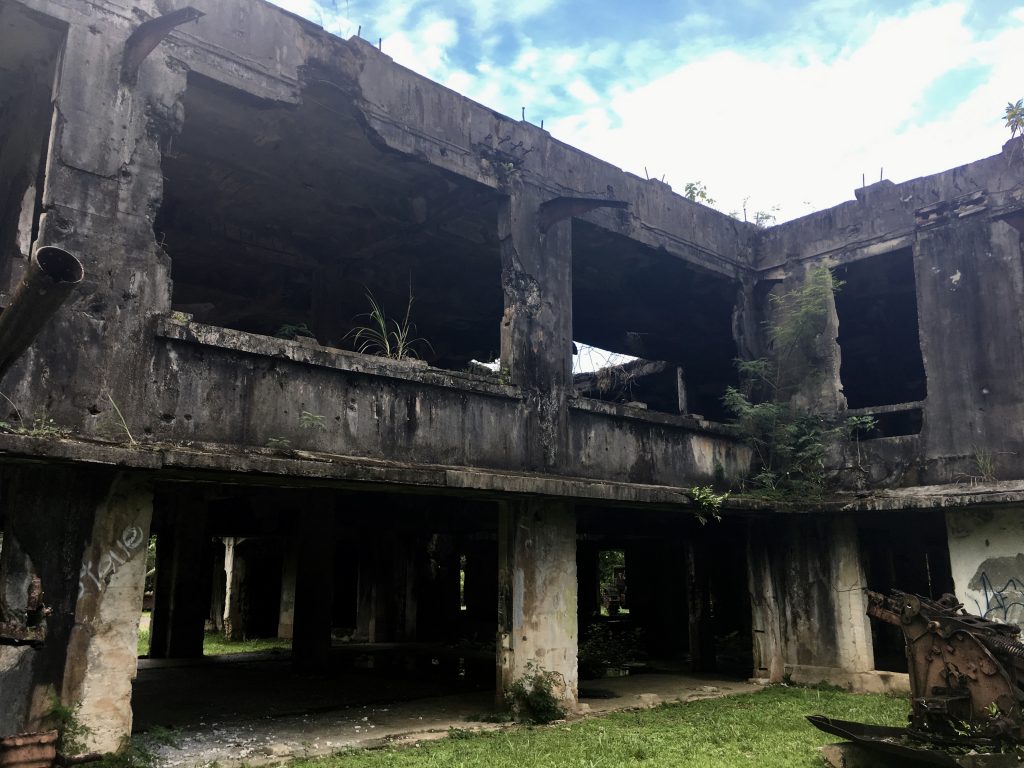 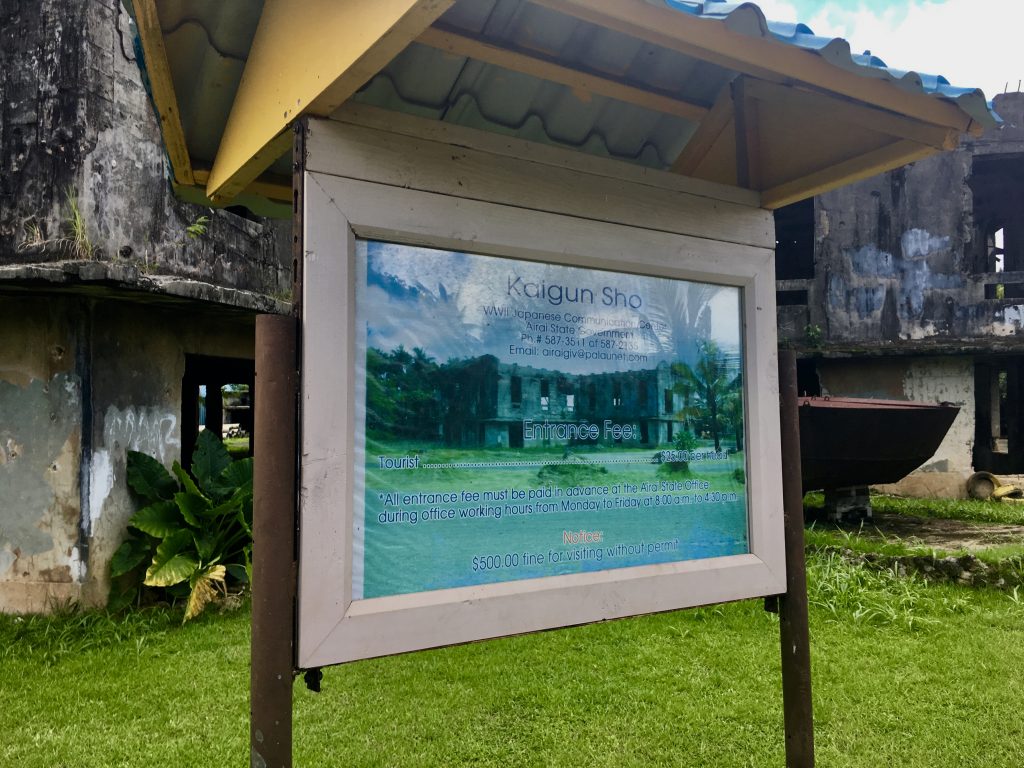 Then we headed along to see another bai that just seemed to be in the middle of a few houses. I’m not sure you’d just come across it if you didn’t know exactly where to look. 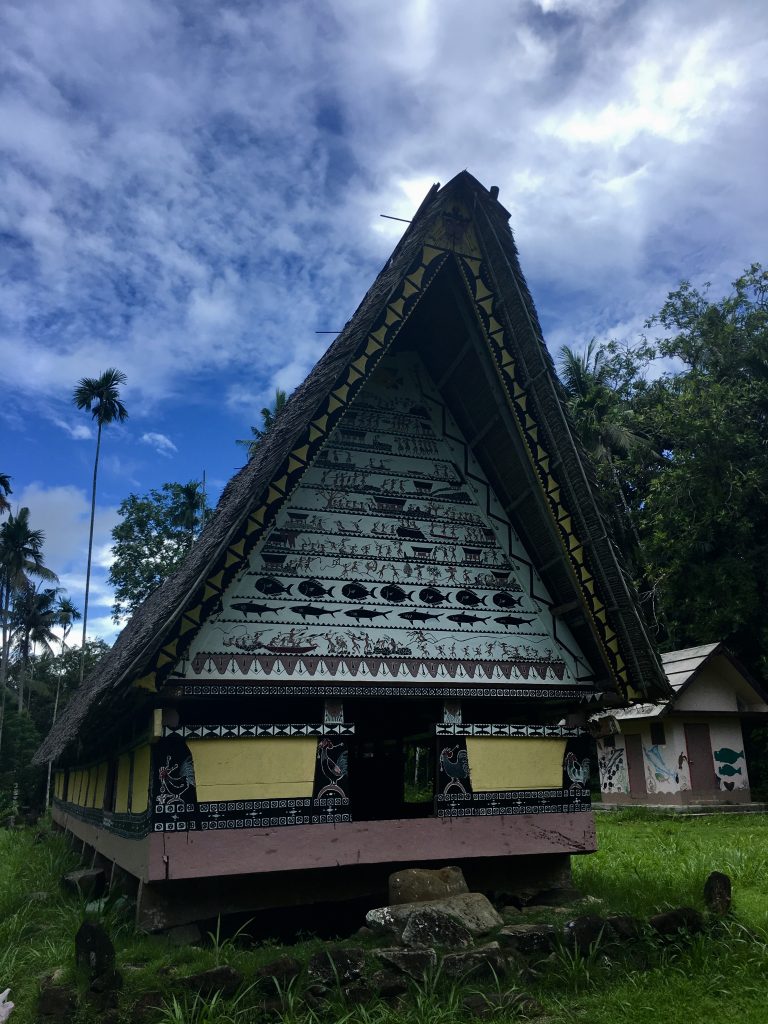